Central Pennsylvania is taking strides to become more accommodating to new businesses and just one example is the Keystone Opportunity Zone (KOZ). Taxes can stifle many new business ventures, but KOZ is providing a once-in-a-lifetime opportunity to develop land with greatly reduced state and local taxes and has been called “the number one economic development strategy in the nation.”

Designed to boost development and purchases in underdeveloped areas, KOZ’s reduce or eliminate specific taxes to investors.  Those who purchase or lease within the Keystone Opportunity Zones are eligible to participate in these beneficial programs simply with the completion of an application.  This program encourages both expansion and economic growth within the Central Pennsylvania region.

The first KOZ was developed in 1999 by Pennsylvania Governor Tom Ridge.  In 2001, another round of Keystone Opportunity Zones was approved, extending the areas available for benefits.  A third round was authorized in 2003.  The program has been quite successful in the Central Pennsylvania area, providing jobs and increasing real estate investments.

In order to qualify for the tax benefits, the property must be purchased within the designated zones.  The zones chosen by the city are often vacant industrial land and vacant outdated industrial buildings throughout the region.  No existing businesses have been chosen by the Commonwealth for participation in the KOZ program.

An example of a local property in the Central Pennsylvania area is  815 Market Street in Harrisburg, Pennsylvania.  Weighing in at 250,000 square feet and seated on 11 acres, this particular building was previously owned by the U.S. Postal Service where it was used as a sorting facility.  The property is considered to be ideal for a manufacturing or distribution operation, given the proximity to major markets in the Northeast region.

Tax breaks are an invaluable resource for both new and established businesses.  In addition to the tax reductions or eliminations, KOZ’s are breathing new life into under-utilized areas.  Keystone Opportunity Zones are emerging as a breakthrough idea, and being met with great success and further expansion.  New properties and subzones are also being added as the success of the program continues.

Don’t miss out on this opportunity!  Keystone Opportunity Zone properties are another one of the reasons I am proud to make central Pennsylvania my home base.  For questions regarding office space in Central Pennsylvania, please contact me by email: mkushner@omnirealtygroup.com or by phone at 717-657-5833.  As a practiced commercial real estate broker, I can help you find the property that suits your needs.

Dedicated to growing an Entrepreneurial Ecosystem in Central PA, the Murata Business Center provides startups with the office space and essential programs needed to help them flourish. This property is owned and operated by the Capital Region Economic Development Corporation (CREDC) and acts as an incubator for aspiring businesses in the area.

The Murata Center also offers mentoring programs with one-on-one guidance from experienced professionals that were once in a start-up phase themselves.  This program will assist you in avoiding some of the pitfalls commonly associated with small businesses.  Their weekly group sessions specialize in writing business plans and understanding core marketing principles.  Past tenants also offer informative presentations to allow members to learn from their experience.

Another distinguishing feature of the Center is the Incubator Program.  Inside this program, a team of professionals determine what a company needs to succeed and will offer two-way communication to support those needs.

The Murata Center is seated in beautiful Carlisle, PA.  With Amtrak services and Harrisburg International Airport within a short distance, the office space is close enough to get you wherever you need to go.

All businesses within the Murata Center are provided with reasonably priced office space, business support services, and resources tailored to emerging small businesses.  Tenants also have access to an Advisory Board consisting of leaders in business, education, economic development, finance and entrepreneurship.  The function of the board is to offer guidance, counsel and mentorship to all businesses within the Center.

The Hershey Center for Applied Research (HCAR) provides Central Pennsylvania with a state of the art facility for medical research and technology. This booming industry is a valuable part of our community. HCAR helps to give both local and global tenants access to advanced technology and other research resources, immersing them in a climate of innovation.

The facilities at HCAR contain the only fully-prepared wet and dry lab space in the Mid-Atlantic region.  Tenants of the facility are given access to the tools required for success and advancement in the research industry.   The strategic partnership with Pennsylvania State University and the Penn State Milton S. Hershey Medical Center provides HCAR with competitive access to advanced technology and research resources.

HCAR is a Wexford Science and Technology property, a company committed to supporting growth and strengthening the surrounding community.  HCAR is part of a large network of thriving research based businesses dedicated to advancement in their respective fields.  Tenants at HCAR are working on some of the world’s most cutting-edge scientific projects, making them part of a burgeoning community for life science and technology based business in Central Pennsylvania.

Located in Hershey, Pennsylvania, HCAR is conveniently located near many major cities including Philadelphia, Washington D.C., Pittsburgh and Baltimore.  HCAR is just over 10 miles from Harrisburg, Pennsylvania’s state capital that was recently named 12 of the 50 smartest places to live by Kiplinger’s Personal Finance Magazine.  Hershey’s local high school was named in the top five percent of public schools in the country by Newsweek Magazine.  Hershey is an emerging hot spot in the Central Pennsylvania area as it’s home to ample entertainment options and valued real estate.

HCAR consists of a three-story, 80,000 square foot and multi-tenant facility with plans for future growth.  The buildings were designed and built to adhere to environmentally-friendly construction standards.  There are shared resources for tenants including conference rooms and building security.  HCAR facilities are also fully customizable to suit each individual tenant.  The building houses businesses already specializing in medical science, nanotechnology and life sciences.

HCAR is ready to provide services for businesses in the science and technology sector from emergence to maturity.  It also allows for the creation of new businesses through the transfer of technology among many different types of businesses, including nonprofit organizations.  The staff at HCAR will work with businesses to provide the services necessary for competition in their specific field.

The Hershey Center for Applied Research is another reason why I’m a proud Central Pennsylvanian.  For more information on commercial real estate in the area, please contact me by email: mkushner@omnirealtygroup.com or by phone at 717-657-5833.  As an experienced commercial real estate broker, I can assist you in finding the property you need. 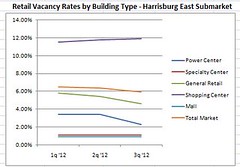 The Harrisburg East retail market experienced a lower vacancy rate during the third quarter of 2012.The rate ended at 5.9% compared to the previous quarter when vacancy was 6.4%. The third quarter represented the first time in 2012 where the retail vacancy rate was below 6%. 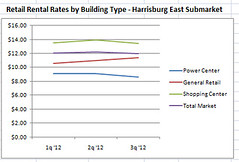